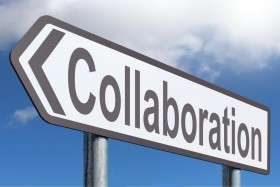 As you already know, every faculty member and student at HCT has an Office 365 account and what most of you already know is that each account has 1TB of storage space. You probably also know that you can share documents and work together on them with your colleagues, but there are also many ways to incorporate Office 365 into your classroom particularly when it comes to group work and projects.

One great idea for using Office 365 for group work is having your student groups create a PowerPoint presentation. This is not a new idea, as teachers have been doing this with groups since the early days of PowerPoint. Now, though, rather than have students use class time to work on the project since it’s the only time they are all in the same place at the same time, teachers can create projects on OneDrive that students can access at any time. The process is simple: a teacher can go into his or her OneDrive and create a folder for the class project. In the folder, the teacher can create a PowerPoint document for each of the groups in the class, and then share each document only with each group’s members. The students will be able to access the document – literally from anywhere in the world where they have internet access – and work on it together in real time. There are several other benefits as well. Firstly, the built-in chat and comment functions will help students work together more collaboratively and keep their project organized. Learners can leave messages for each other and comment on parts of the project they think need editing, for example. Also, because the documents were created in his or her OneDrive, the teacher can pop in and out of group projects to check on progress and to make sure students are on task. He or she can also comment and participate in the chat, to set reminders and offer direction, which will help students stay on course so the project they end up submitting doesn’t miss the mark. Finally, because the teacher is the owner of the document, he or she can see previous versions of it which will help keep an eye on who is doing what, in the event some group members feel others didn’t do their share of the work.

Another idea for collaboration is a group writing assignment, which could be done either in class or as a longer project. Again the teacher could set up the files in his or her OneDrive, share them out to students in the group. As a longer project it would work much the same as the PowerPoint project above, but as a live, in-class assignment (or as a task in an online class), the students could be given the task to work on as the teacher popped in and out of the document, giving feedback and adding notes. This could be done using the smart board in class so students can see what other groups are doing, and the teacher can also move students in and out of the groups so they can share experiences. Documents can be swapped between groups as well, for peer review and feedback.

Finally, though we’ve only just skimmed the surface of a pool of ideas here, students can create videos and upload them to Stream. These can be done in combination with the above projects, as students create a video presentation of their work, or a standalone project where students have to create a video of themselves doing something, for example. It doesn’t have to show their faces, so those students who feel uncomfortable doing so won’t be at a disadvantage. They can record themselves making something – food or a drawing or an object, for example – and narrate the steps. Or students can create videos of photo montages that they narrate and they can do screen recordings of work they’ve done. The list of possibilities are endless. Students can create the videos in whatever program they feel comfortable with, upload them to their Stream accounts and share them to the group that a teacher creates for his or her class. What’s more, with a group here (as well as with the documents in the above examples), the teacher can adjust the privacy settings so students can feel safe in knowing they’re working in a private environment.

As mentioned, this really just skims the surface of the type of collaborative work that can be done using Office 365; the possibilities are seemingly endless, and are limited only by your imagination. These and most other ideas that come to mind can be incorporated as off-site projects or in-class work, both in face-to-face and synchronous online settings. Experiment, and be sure to share any ideas that work well – and any that don’t – with your colleagues.