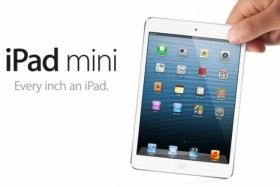 The iPad mini will definitely feature on the top 5 list of the coolest devices for this holiday season. It’s not quite the powerhouse as it’s high-end full-size big brother (iPad fourth generation) but it’s got the chip of the iPad 2 and the screen resolution of the iPad 2 as well, just scrunched down. It is a lot of fun to use, the size is great and perfectly weighed to carry around (either in your handbag or the back of your jeans pocket).

Compared to it’s relatively lower-priced competition, the iPad mini has a lot going for itself. According to Apple, the iPad mini will be compatible with over 250,000 apps right out of the box. Obviously, all of Apple’s apps are included in this list. This probably means all apps available in the iTunes store compatible with the bigger iPad will work flawlessly with the smaller screen as well. And having just bought it, I can safely say that it does.

The feature missing (‘held back’ more like it) is the Retina Display. I am sure the next generation of iPad mini will include this brilliant feature that makes great use of the gorgeous 9.7″ (diagonal) display panel of the fourth generation iPad. Check out the Macworld video review that discusses the iPad mini and the new iPad (fourth generation) and why I believe the mini has what it takes to impress users of all ages.

The big question for administrators and educators at HCT would be whether or not iPad mini can be adopted for and by our students in place of it’s big brother. The short answer could easily be a resounding ‘yes’. It should become popular especially amongst our female students who would love the optimised screen (7.9″ diagonal) and the re-sized app icons along with the lighter weight of the device that makes it a great portable companion. The choice of the device will be dictated by what the end-user would ultimately use it for. If you are just sticking with books and movies then this definitely would be a great choice in my opinion. Perhaps you may want to wait and buy it next year (assuming Apple will release the Retina version of the iPad mini).

For those new to the concept of Retina Display, it simply means a display where you can’t see the pixels resulting in crisp, sharper display of text, images and videos. And though the iPad mini screen is nice, it is somewhat pixelated when you zoom in and that to a budding graphics designer or artist can be a ‘distracting’ experience. Here is a screen comparison to illustrate what I mean: 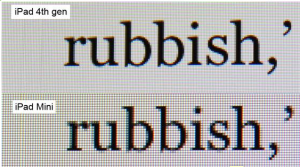 The iPad mini comes in two colours. Black and White. The iPad Mini models are priced in the US Apple store as: 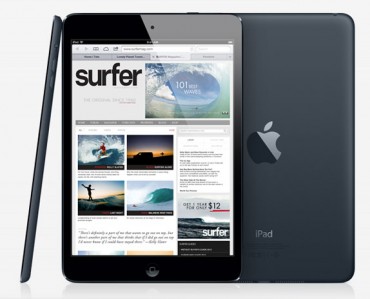 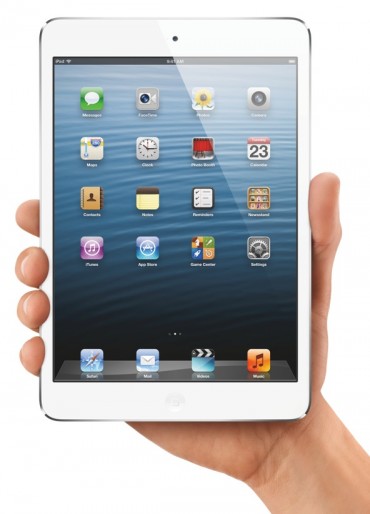 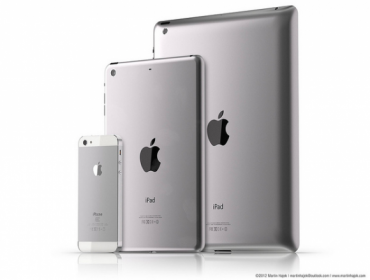