In the TOP 10 PARTICIPATORY LEARNING ACTIVITIES (PLAs) series, I described, in brief, ten configurable and reusable PLAs that you can employ in your practice. Their flexibility in design makes all of them ideal for your expanding toolbox to offer more active learning in your courses, and can also be adapted easily to the online environment.

This post, and another later this month (July 2020), are two more supplemental blog posts, each containing an additional three PLAs that focus more on the Bloom’s Taxonomy (BT) (Bloom, 1956; Anderson & Krathwohl, 2001) distinction between the higher order thinking skills (HOTS – apply, analyse, evaluate, create) and the lower order thinking skills (LOTS – remember, understand). Remember to keep in mind that moving from HOTS to LOTS is a continuum,  as represented by the vertical arrow as lever moving up and down as appropriate. Let’s have a look today at three HOTS PLAs.

This is an activity that overlays a reflective question on each of the six levels of BT. This is best done as an exit activity in your class, and can be done either individually or as a group. In a large class, I’d use the breakout room to make “circles” of six, so that each in the group can be the first to answer each of the six reflective questions posed. Note that each question is aligned with each general idea of the strand it represents, so that the Remember reflective question is very simply “What did I do?”  and call for a simple recollection of what occurred in the class on that particular day. The Create reflective question “What should I do next?” mirrors what the group might collectively decide to do as an action point extending out into the next class, or to the project they might be working on together.

Having your learners do these questions in order from LOTS to HOTS helps them to intuit better the levels of complexity involved in their metacognitive processes. Reflection is a vital part of the learning process, so why not align it to BT and get your learners into the regular practice of deeper learning? 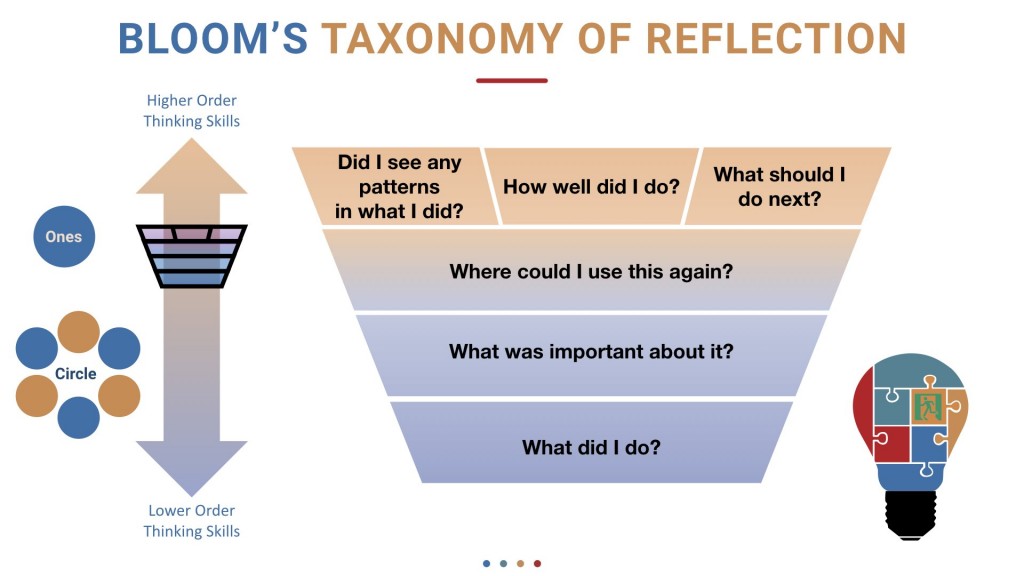 The fishbowl is an extremely flexible tool that has myriad uses, and it’s always worth experimentation.

This activity divides the class into two groups: the observers and the observees. The observees are “the fish”. In a physical class, you might place the fish in the middle of the room, and have the observers sit in a circle around them.

Participation in this activity is divided. The task is to be carried out by the fish. If it’s a brainstorming activity, only the fish do the brainstorming. If it’s a discussion activity, only the fish do the discussion. If it’s a mind-mapping activity, only the fish do the mind-mapping. In every case, the observers’ participation is guided by the teacher, and can range from giving general observations of the fishes’ behaviour, to watching for specific language or thoughts that the fish produce. The idea is that the observers are the central learners on the outside looking in, and their job is to process what went on when the fish did their activity, and see if it can be generalised out as best habits for whatever habit you want to instill in your learners. In a class on research methodology, for example, the fish might be an interviewer and an interviewee, and the observers are listening for interviewer questions to identify different types of research  questions that can be asked to collect qualitative data. The number of fish varies via the context of the content being learned.

The main target, though, is to make sure the observers watch for patterns to describe during a later whole-class processing of what went on during the fishbowl activity. 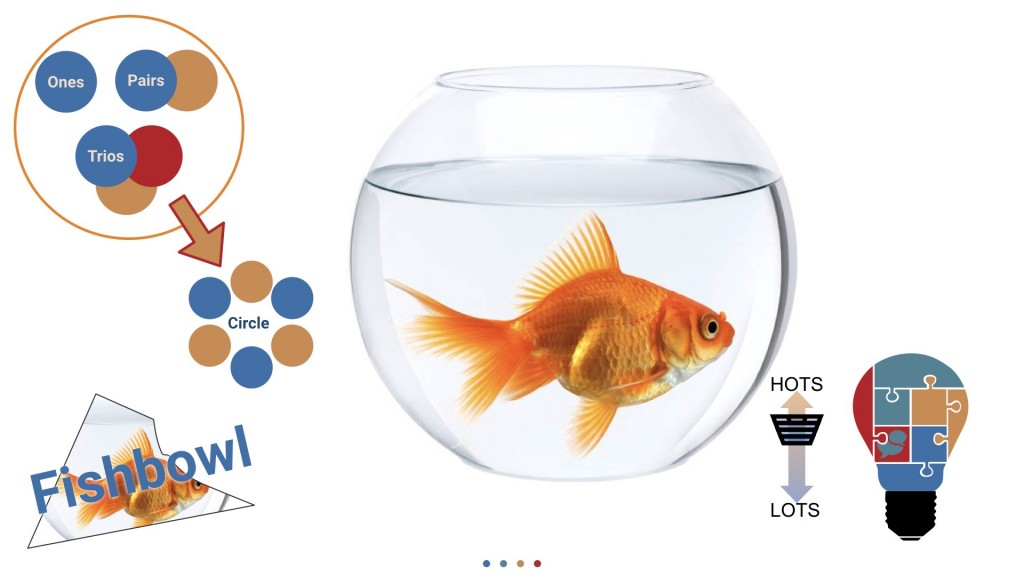 If you followed the original series, you’ll notice that the PMI (DeBono, 1982) looks similar to the KWL (KWHLAQ). However, the only similarity is the three columns. The PMI functions in a very different way.

Comparing/contrasting is a HOTS analytic routine that should already be a part of your instructional toolbox. DeBono conceived of the third column, the  “I” column, where your learners consider the implications of the thing they are analysing. This of course is a great conversation starter, and contributes to critically analysing just about anything. It is hoped that the subsequent conversations generated in your class about the implications will have a strong positive effect on learners and learning.

As with all graphic organizers, this should start out as a team effort, before you use PMI individually. Once your  learners feel more familiar with looking at a third aspect, this can then be folded into your routine use, and the implications piece can become a reliable springboard to deeper research about any particular topic.

Nearpod’s “Draw-it” tool or Padlet are two good pieces of technology where you can employ this type of graphic organizer. 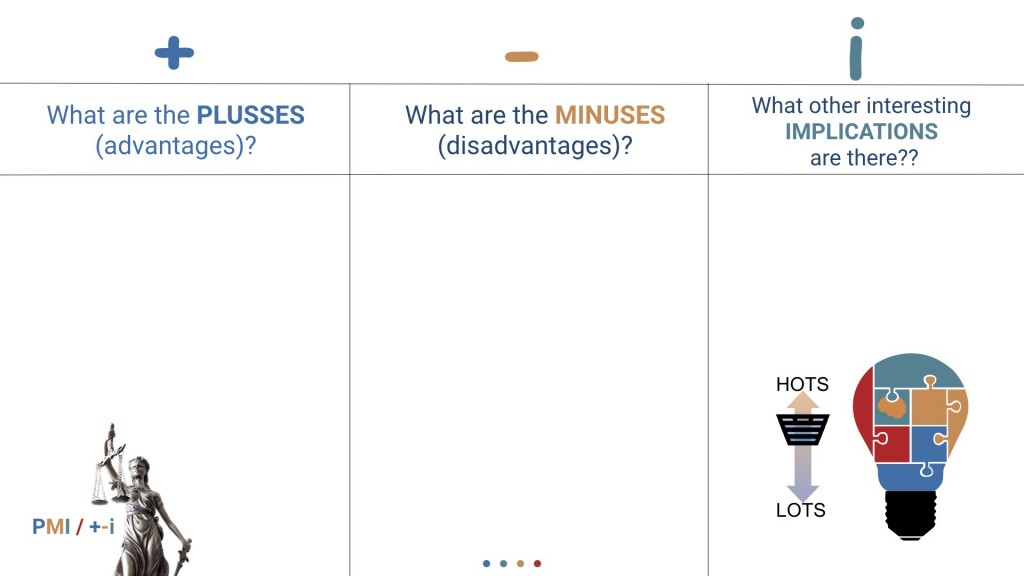 This is a supplemental installment, in two additional parts, to the Top Ten Participatory Learning Activities (PLAs) Series, published in the Winter 2019-2020 term. Each week, Dr. Larry Davies described PLAs that are effective to use online. Your use of these PLAs will foster better learning and higher motivation in your learners. Each PLA contains an illustration that contains four elements:

Also, the description contained suggestions for one or more online tools you can use with the PLA.

Previous blogs in this series include:

De Bono, E. (1982). Plus, Minus, Interesting: Weighing the Pros and Cons of a Decision, De Bono’s Thinking Course.
http://www.mindtools.com/pages/article/newTED_05.htm