Doing group work is of great benefit to you and your learners. It keeps everyone active on a task. It promotes team building and learning roles. Maybe most importantly, it gives you the chance to focus on a smaller group of learners and engage them in formative feedback, discussion, and coaching, depending on the task you are working on with them. This role will also help them later when they are asked to give peer feedback or coaching. How you decide to work with groups usually depends on your learning outcome for the task or activity, and a little imagination with your digital tools at hand.

Both Collaborate Ultra and Zoom have something called the “Breakout Room” feature. This will digitally divide your learners into groups. We’ll come back to applying the Breakout Room feature with some quick ideas.

Let’s look first at how you might set up groups in a physical classroom, by looking at this chart below. 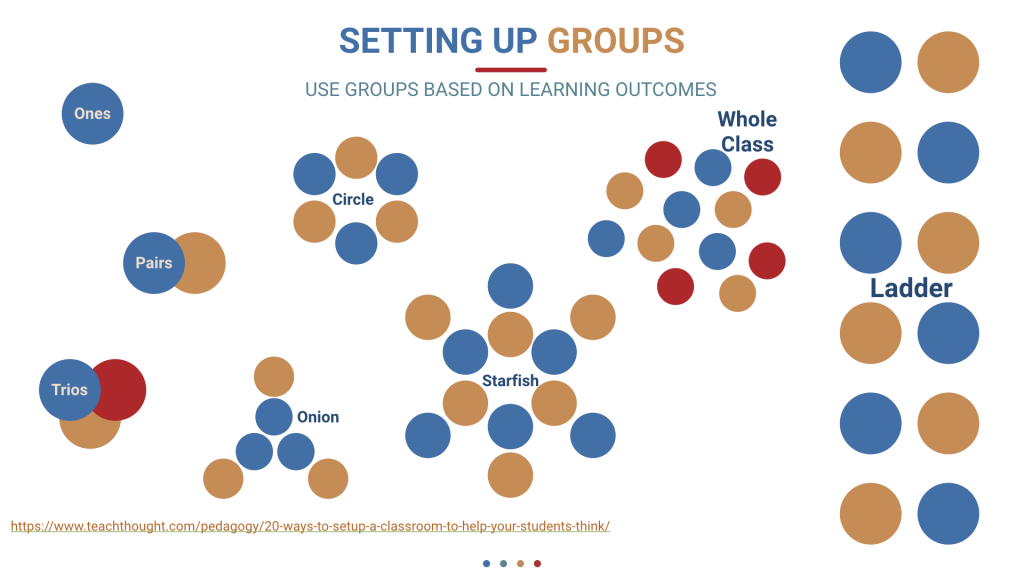 There are a minimum of five effective groupings in a physical class, with one grouping having four variations. Let’s assume you have a class of 24 learners:

In addition, it’s possible to pair pairs, so that you have groups of four, meaning six people can be speaking at one time. In fact, 24 is a great number in a class. You can divide by 1, 2, 3, 4, 6, 8, 12, and 24. Though there isn’t space for a thorough discussion, experiment with these combinations using the breakout rooms.

I’m going to focus on Zoom’s breakout rooms, as this is what I tend to use most. You can easily create a breakout room and configure it automatically, or manually. I prefer to use the automatic function, as this will randomly distribute your learners. Within one class, you can start a discussion in groups of six, then switch them around into smaller groups of three to add on details to the discussion. Then you can switch back to a larger group of 12, for example, so that the group of 12 comes up with three main points from the topic, then the two groups come back together as the whole class and attempt to negotiate the four most important points out of the six they discussed in an earlier configuration. Zoom makes this almost effortless to do.

One other feature in Zoom is that you can designate your learners as hosts. Hosts have a unique power in the breakout groups: they can move from breakout room to breakout room. You can use this in an activity to assign several of your learners as hosts, and their task to is move through the rooms in order to fulfill a task that you set for them. Perhaps they have to go to each room and try to summarize the discussion they are hearing, or to give peer feedback to a discussion going on in a room, or to assist a breakout room group in the solving of a problem that the instructor has set out, or to coach a presentation that each breakout room is preparing. Or maybe they are judging group presentations. The uses of this feature are limited only by your imagination.

In short: do group work as often as possible, and change things up depending on the task. The Breakout room provides a powerful online tool for this task, and you’ll see learners participating much more if they have a smaller audience / peer group that they are working with.